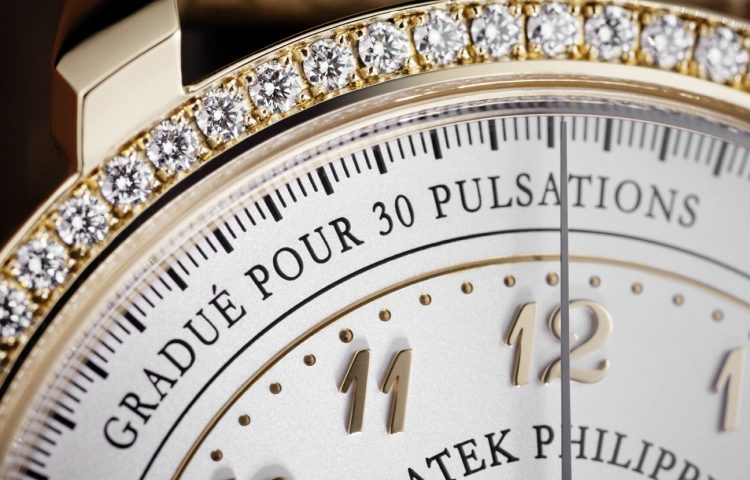 The year is 2019 and no one says “diamonds are a girl’s best friend” anymore. Precious gemstones no longer identify as just accents to be emblazoned and wearing a watch now tells you the time, place, and where the planets are aligned. For those who are looking to step into the world of faceted radiance, these timepieces embody both beauty and brains in telling time with just a little bit extra. 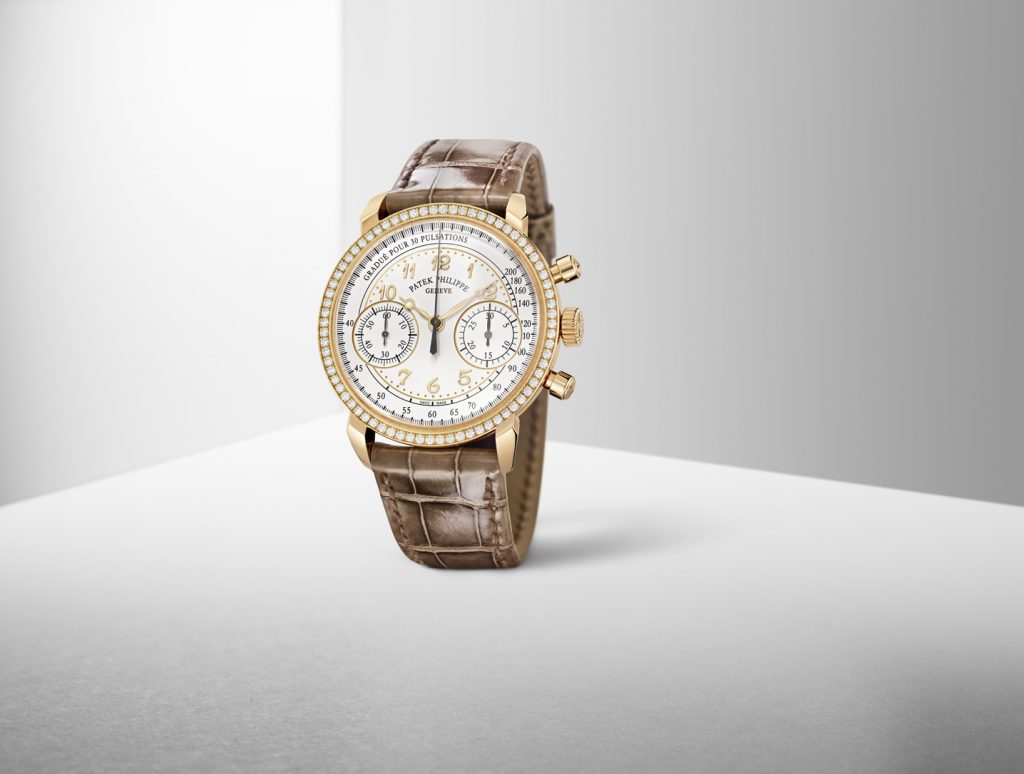 Patek Philippe Ref. 7150/250R
It’s a common misconception that women’s watches are nothing but pretty things, and anyone who dares to assume that has not had the pleasure of being in the presence of Patek Philippe’s first ladies’ chronograph in 2009. The production unfortunately ceased seven years later, but Baselworld 2018 saw the revival of a manual-wound ladies’ chronograph in the Ref. 7150/250R. The in-house CH 29-535 PS caliber carries six patented innovations, and its mechanical glory is on full display through a sapphire crystal caseback. While it’s been marketed as so, the watch has been welcomed on many men’s wrists. The dial configuration, Arabic fonts, pushers, and Breguet-style hands evoke a vintage charm as if the timepiece has been a well-preserved, complete with a box sapphire crystal and a brilliant-cut diamond bezel. 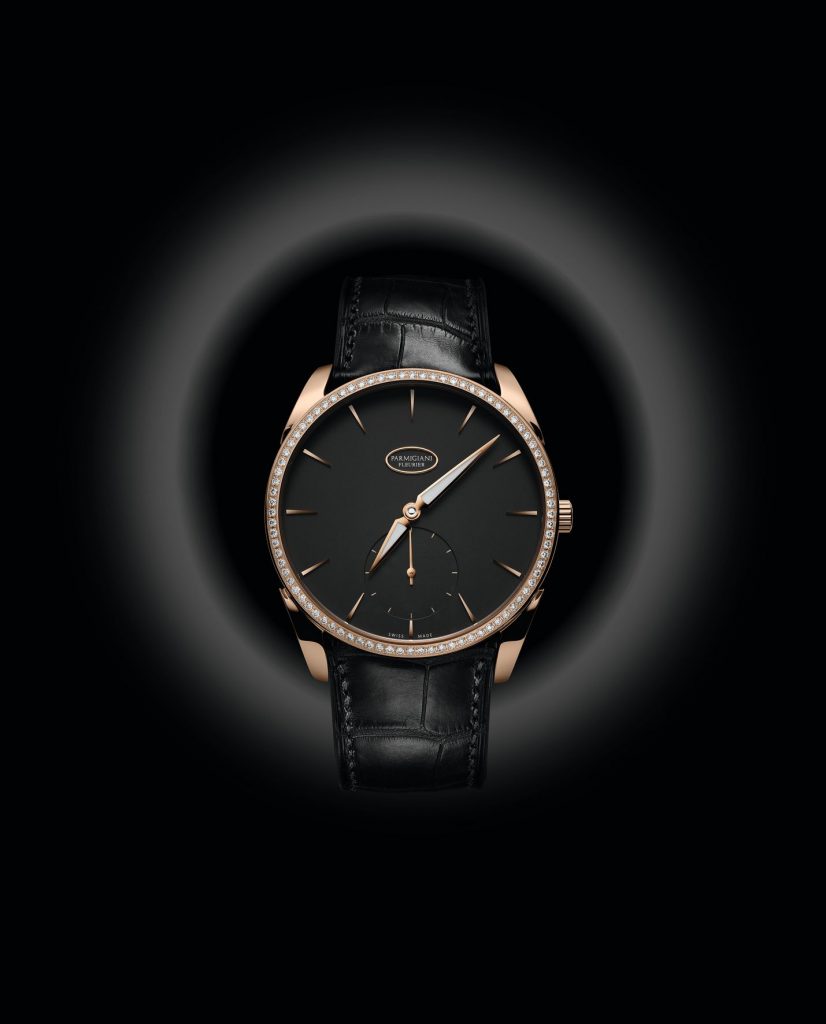 Parmigiani Fleurier Tonda 1950 stone-set
In invoking a touch of razzle dazzle, Parmigiani elevates the minimalistic Tonda 1950 with timeless precious stone settings. The Tonda 1950 in itself was never a pompous collection, and maintained its fidelity with its minimalist time-telling dial, save for the occasional tourbillon and moonphase versions. Yet even with the 1950 in a new stone-set range, the sparkling additions are subtle yet noticeable enough to highlight the watch face. The more brazen could opt for the pink gold with colourful precious stones, but a classic all-black would be just as befitting with brilliant-cut white diamonds that add just as much sparkle under the cuff. 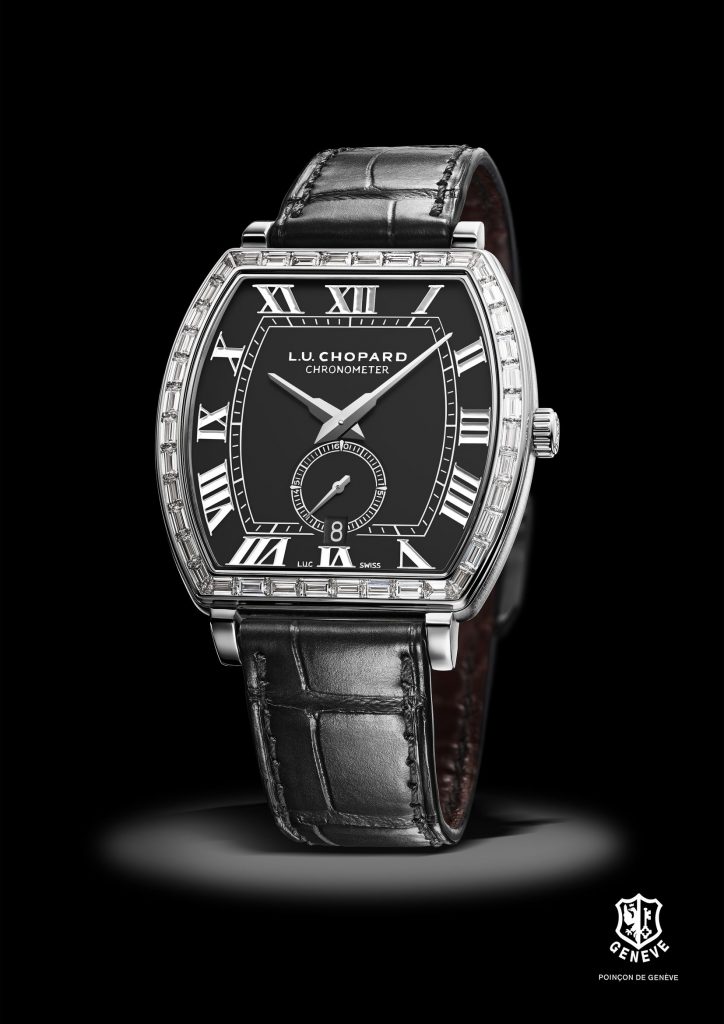 Chopard L.U.C Heritage Grand Cru
The Scheufele family is known to have a decadent hobby in fine wine, with an estate vast enough to house the fermentation process in aged barrels. It is this tonneau shape that uniquely frames the Heritage Grand Cru, that features bold aesthetics of thick Roman numerals, minute and seconds railway tracks, and Dauphine-styled hands. Adding glamour to this masculine piece is a diamond-set bezel comprising 40 baguette diamonds on an 18k white gold case. At 38.5mm by 38.8mm, it houses the L.U.C 97.01-L calibre, a slim self-winding movement that is uniquely shaped and finished with Poinçon de Genève certification. Powered by Chopard’s Twin Technology, the movement is powered by double barrels providing up to 65 hours of power reserve with winding from a micro-rotor. 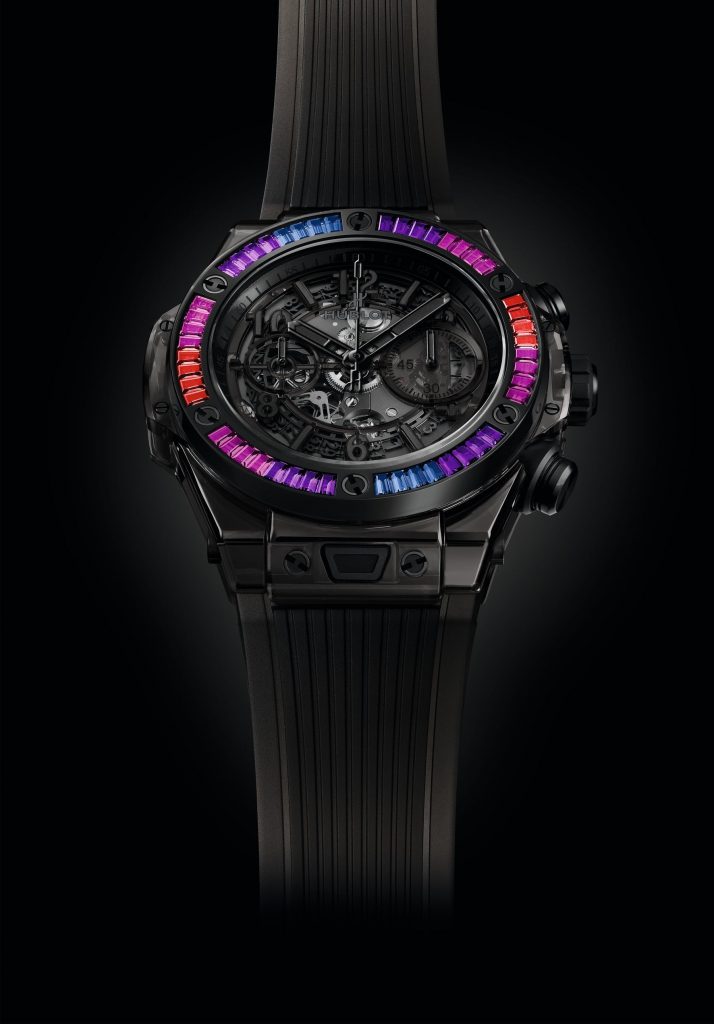 Hublot Big Bang Unico All Black Sapphire Galaxy
Hublot fashions space in stealthy fashion with an all-black Big Bang housed in smoked sapphire crystal. The case’s translucency evokes a certain sense of curiousity where it ever so slightly exposes the black-plated titanium rivets, pushers, and crown. Colouring the surface are 48 baguette-set amethysts and various coloured sapphires set around a black-plated bezel, where each wave of stones is strategically juxtaposed to contrast the other. Time is read off a skeletonised HUB1242 UNICO movement, equipped with a 72-hour power reserve, flyback chronograph, camouflaged totalisers, and black lacquered hands with black luminescence. 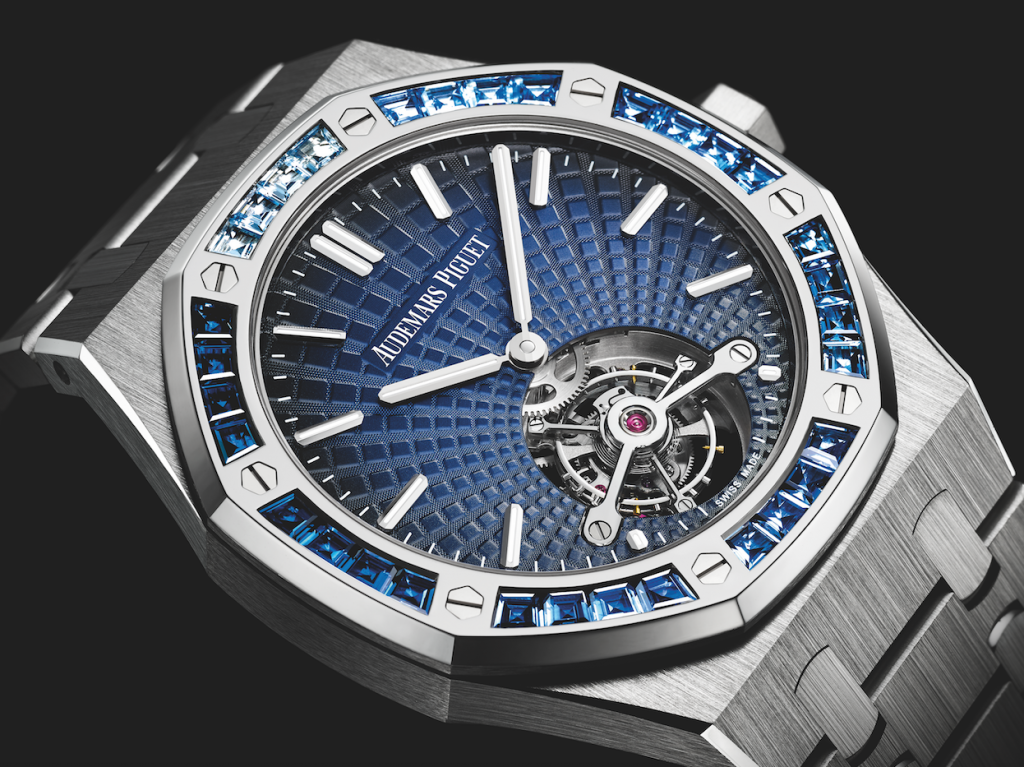 Audemars Piguet Royal Oak Tourbillon Extra-Thin Ref. #26521PT.YY.1220PT01
The classic luxury sports watch staple from Audemars Piguet gets a full makeover in a particular version both in precious metal and precious stones. The Royal Oak Tourbillon Extra-Thin collective that was unveiled last year donned new dial colours, one of which bore a gradated smoky blue dial. The Tapisserie dial is engraved in a particular fashion, forming a sunray version of sorts with varied-sized squares that radiate from an explicitly open-worked tourbillon. Powered by an in-house Caliber 2924, the watch is housed in platinum and completed with a sapphire-set bezel. 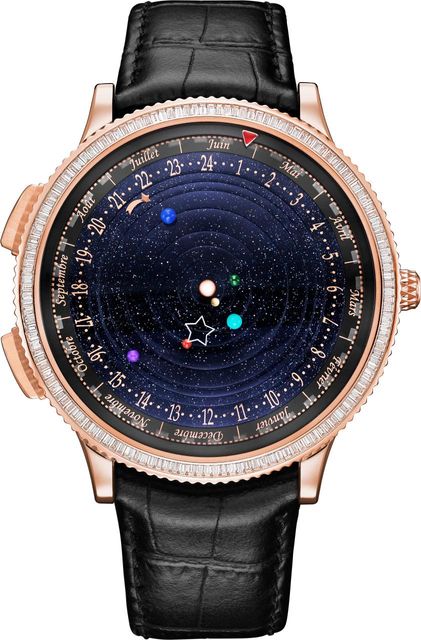 Van Cleef & Arpels Midnight Planétarium Watch
French jeweller Van Cleef & Arpels elevates that third-grade science project into a more embellished scale of the solar system in an enthralling Midnight Planétarium timepiece. Encircling the dial in concentric circles, the Sun and six planets are each set with different semi-precious stones. From turquoise to serpentine, each beaded planet creates a visual contrast against the glittering aventurine dial, oscillating in real time. The automatic mechanical movement is exclusively developed for Van Cleef & Arpels by Dutch watchmaker Christiaan Van der Klaauw. Along the periphery mark 24-hour and month indicators, with a rotating bezel to determine the position of the “lucky star”. 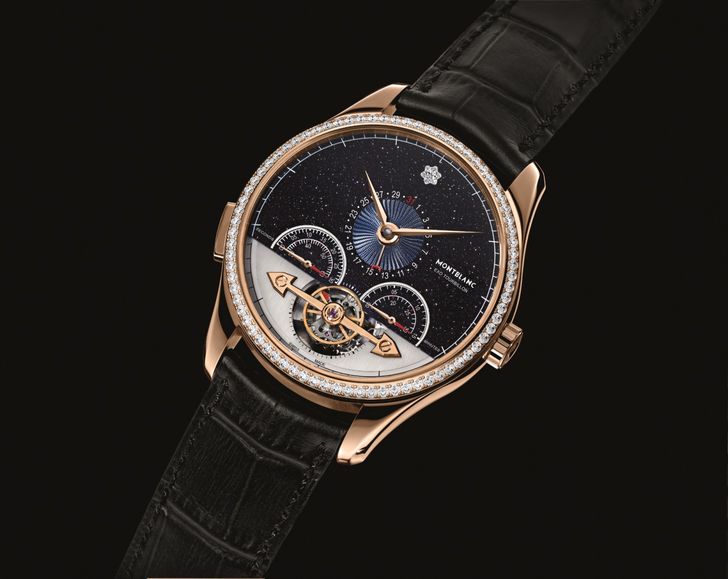 Montblanc Heritage Chronométrie ExoTourbillon Minute Chronograph Vasco Da Gama Limited Edition
The diamanté subtleties in this particular tourbillon minute chronograph by Montblanc are anything but. While the timepiece features chronometric complications like the quick-stop seconds and a twin-barrel monopusher chronograph, as well as a tourbillon, the glittering aesthetics soften the complex MB R230 movement. Dark blue aventurine takes up most space on the 33.7mm dial, yet the glitter it emits pales in comparison to a diamond-encrusted emblem and diamond-set bezel. White markers with accents of red provide sufficient legibility gestured by red gold hands, distracted only by the wide tourbillon bridge that holds up the patented ExoTourbillon on the rhodium-plated surface.