Marion Fasel is a jewellery historian and author of eight other books on twentieth-century jewellery. She is the founder of the online jewellery magazine, The Adventurine. Fasel’s new book, Beautiful Creatures: Jewelry Inspired by the Animal Kingdom, depicts some of the most spectacular beasts transformed into sparkling treasures. She tells us more about the endearing stories behind the individual pieces, the colourful histories, and fascinating symbolism of these ‘remarkable creatures in precious gems.’

What sparked the idea for a book of this nature; particularly, in association with the American Museum of Natural History?
When the Museum invited me to guest curate the exhibition, we had lots of meetings and reviewed several ideas. The exhibition was scheduled to coincide with the Museum’s 150th anniversary and the opening of the new Allison and Roberto Mignone Hall of Gems and Minerals. With those celebrations in mind and all my visits to the museum, walking past the famous dioramas filled with animals, I had the idea for the animal theme. I thought gem-set animals made over the last 150-years would be a nice way to pay tribute to the museum’s anniversary and the gems in the jewels would be a tribute to the Mignone Hall of Gems and Minerals.

The animals in the Museum also gave me the parameters for the types of animals I would choose for the exhibit. I decided all the jewels had to depict animals that were elsewhere in the Museum. So, there are no barnyard or domestic animals or any animals dressed as people. The Museum staff always looked at me quizzically when I said ‘no animals dressed as people,’ but it is a whimsical sub-genre in the category.

The theme also allowed me to show how the American Museum of Natural History and others like it around the world inspired many designers to create animal jewellery. For example, at the turn of the century, collecting butterflies and insects was a popular pastime for the general public. Jewelers responded to this enthusiasm by creating butterfly and insect jewels.

Many designers have been inspired by the gems and minerals in the Museum. Joel Arthur Rosenthal of JAR explained once in an interview that he spent a lot of time in the hall growing up in New York City. You can see his passion for gems in the JAR jewels in the exhibition particularly his Montana sapphire butterfly brooch.

You’ve been working diligently on the book for around two years – travelling all the way to Paris and elsewhere; it’s been an immensely passionate exercise. Would you walk us through the research process?
The project itself took me around two years, but it really took me 30 years, my entire professional career, plus those two years. I called on just about every contact I have ever met to find the jewellery. It was a real international treasure hunt. My main sources were corporate jewellery archives such as Cartier, Tiffany, and Boucheron, jewelers with personal collections and private collectors.

For some information, I relied on the same sources. I also called on a few of the departments at the Museum to see if they could identify some of the insects and birds.

Going above and beyond the gems and manufacturing in a design, I like to put jewellery in the general historical context of the period it was made. For example, I wondered why there were suddenly so many big mammals from Africa such as lions, giraffes, zebras and elephants made during the 1960s. When I looked back at what was happening at the time, I learned it was the period when the United States government passed the Endangered Species Preservation Act and high-profile conservationists like Peter Beard were publishing books on the issues surrounding animals in Africa. The news about these events put African mammals foremost in the minds of designers and their clientele.

You reached out to private collectors to borrow the jewels. Did it involve coaxing and pleading?
I did all the photo research. I am very particular about images, so I handled that myself. I worked with photo archives and I dove into the historic illustrations in the Museum’s collection. And yes, I did have to do a lot of coaxing, pleading, and writing emails and making phone calls to convince lenders to part with their jewels.

2020 was the year of the pandemic and ongoing – How did this impact you, whilst you were busy wrapping up the book?
I was finishing up the book in March of last year when the pandemic became a serious issue in the United States. It was an odd feeling to be working so hard when the general news for many people was about how they were trying to find ways to fill the hours. Suddenly, people were taking up time consuming activities like baking bread and flower arranging and my work on the project didn’t change at all. Remarkably, in the midst of everything, the book was published on time, which was September of 2020. It was the date the exhibition was originally scheduled to open.

The Beautiful Creatures is so compact; your previous books are huge and heavy! Was there a conscious effort to keep this book small?
Long before the theme of the exhibition was finalised, I told the Museum team I wanted the catalogue for the exhibit to be small format. I wanted the price to be reasonable and the size to feel almost like a children’s book. Children make up such a large portion of the audience, I wanted the book and the subject matter to feel accessible to them.

Often, when fine jewellery is displayed in Museums, it is presented as a symbol of power and wealth. I wanted to show jewellery is so much more multi-dimensional than that and present pieces that have a sense of wonder and joy. I have been delighted to hear from many jewellery designers and friends how much their children enjoy looking at the book. How did you arrive at the decision on which jewels to feature on the cover? Do you have your favourites? I must admit I rather love the Maria Felix Cartier Crocodile necklace.
For the cover, I told the designer I envisioned it as a kind of Peaceable Kingdom, a famous series of 19th century paintings by Edward Hicks that show a gathering of animals. I did a very amateur collage of various animals in the book and she took it to the next level. I didn’t have specific animals in mind for the cover. I was open to anything. It was something that evolved as we finalised the creative.

The Maria Felix necklace is certainly one of the most important pieces on the cover and in the exhibit and I love everything about it. I love that it was made in the 1970s because I think it is an overlooked period for great fine jewellery. I adore that Maria Felix commissioned it and was rumored to have taken a baby crocodile into Cartier to let them know she wanted it to look realistic. It shows how a daring client can make a master jeweler push the envelope even further. Technically, it is mind blowing. The jewel is totally flexible and the two crocodiles can be separated and worn as brooches. The feet of the crocs can also be removed in order to make it more comfortable to wear. It’s just astonishing in every way.

The content in your book is divided into Air, Water, and Land (sort of like Sir David Attenborough’s wildlife series – Blue Planet, Planet Earth, and Life). Which beautiful creatures charmed you the most in the three categories? Was it their relevance in history, or perhaps the artistry that held the greatest fascination?
Oh, I do like that Sir Attenborough and I have the same categories. That’s lovely. Picking favourites, however, is really hard for me. I truly appreciate every piece in the exhibition for different reasons. I can list a few jewels I hope people take special notice of in the exhibit.

In the Air section, I am in awe of the Mellerio plique-à-jour enamel bird brooch made in around 1940. It is the perfect example of the old adage, ‘necessity is the mother of invention’. The supply of gems and metals was interrupted during World War II and the Occupation of Paris. Mellerio worked around the issue by using enamel. The piece is far more sculptural than most jewels made during the Art Nouveau era when enamel experienced a renaissance. The motif of a bird could be found throughout jewellery collections in Paris during the period. Birds were a subtle symbol of hope and liberation.

In the Water section, I adore the Verdura scallop shell brooches. The designer Fulco di Verdura bought the shells in the gift shop at the American Museum of Natural History. At his Fifth Avenue studio, he had craftsmen mount tendrils of gold and gems into the shells. The precious parts were intended to look like waves receding from the surface.

In the Land section, I am very fond of the late 19th century emerald and diamond snake bracelet. A lot of beautiful snake bracelets were made during the period but I have never seen anything quite like this one with the emeralds. I love the movement in the design the way it swirls around the wrist. And the symbolism of snakes is so wonderful. They represent eternal love and wisdom. 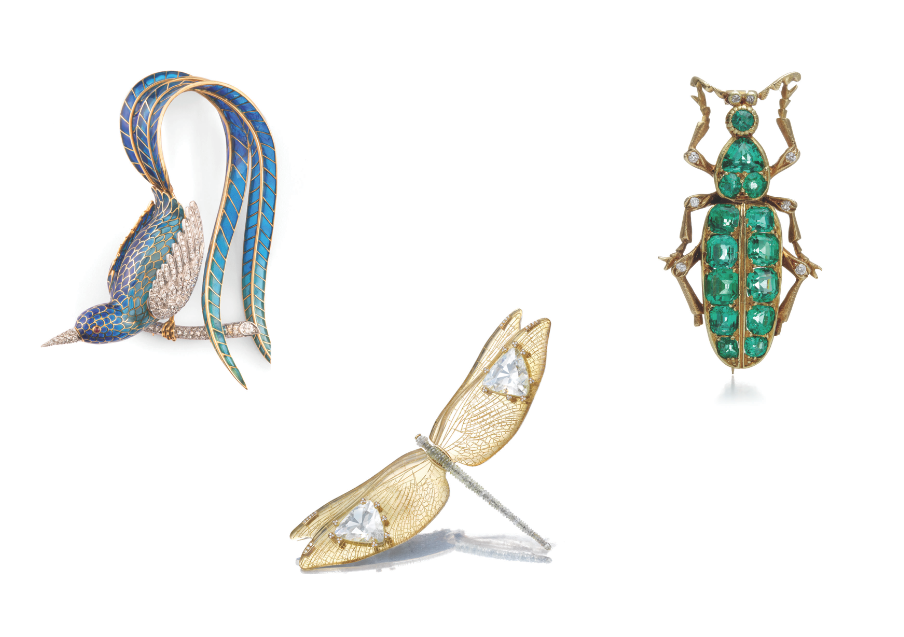 The book relays stories behind the individual pieces peppered with anecdotes, colourful histories, and symbolism of these creatures rendered in precious gems. Did you chance upon new information and fascinating stories whilst writing the book and sourcing details?
One of the great joys of writing books is the opportunity to do deep research dives and finding out things you didn’t know previously. There were lots of little facts that I enjoyed discovering. David Webb, for example, practiced upcycling long before it was a word. He extracted lots of the carved jade found in his jewels from antiques.

Christian Hemmerle told me how he and his father used to go to the natural history museum in Munich when he was a teenager and those visits inspired the tarantula the firm made in 1995.

The original design for Jean Schlumberger’s jellyfish brooch was made for Bunny Mellon after she was stung badly by a jellyfish. You might think she would not want a jellyfish after the incident, but she loved the jewel Schlumberger created for her as a surprise. Among all his masterpieces, it is considered one of the most artistic.

If you could have any of these jewels, what would you pick?
This is a really challenging question. I think, perhaps because you brought it to mind, I would choose the Maria Felix crocodiles. It is just such a special piece of jewellery.

The American Museum of Natural History (AMNH) will host the temporary exhibition gallery – Beautiful Creatures, a celebration of exquisite historic and contemporary jewellery inspired by animals. For details on the show, please visit the museum’s website