Gold intrigues. A rare, pure and soft yellow element that is the most malleable and ductile of all metals. Depending on what is mixed in with it, gold can appear silver, pink, copper red, aside from its native and inimitable yellow hue.

In the 13th century, gold was used in clock towers and castles all over Europe. Over time, pocket watches and wrist watches started to require gold in their manufacture, thus blending the functions of timekeeping and aesthetics. Today, almost 500,000 gold watches are made each year. Let’s take a look at five of the most exquisite creations. In 1812, Queen Maria Carolina of Naples commissioned Breguet to create possibly the first timepiece ever to be worn on the wrist. Inspired by this royal, the watchmakers of Breguet created an elegant, egg-shaped watch case with a fine fluting on the case band. This line of watches became known as the Reine de Naples, or Queen of Naples. In its latest version, the case measures an elegant 33 by 24.95mm and fits a petite wrist. The chain bracelet now comes in 18k gold with an invisible folding clasp. The mother-of-pearl dial features exploding Roman numerals as hour markers for added legibility. 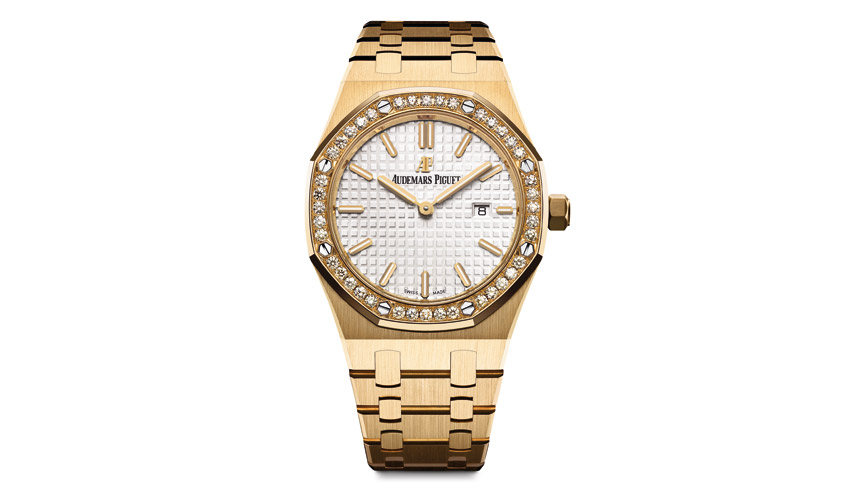 This new Royal Oak Quartz 33mm edition is accentuated by 40 brilliant-cut diamonds (0.73 carats) on the bezel, and the ‘Grande Tapisserie’ pattern on the silver dial. Additional trademarks remain in place, like the 18k yellow gold case, yellow gold applied hour-markets, and Royal Oak hands with luminescent coating, as well as the dazzling exhibition caseback in glare-proofed sapphire crystal. At the SIHH 2016, Piaget showcased the Altiplano 38mm with metier d’art dials, depicting the Yves piaget rose, a flower that was named after the last Piaget family member to own the firm and who had a great love for roses. One of the distinguishing features is the hand-engraved relief dial that is less than 2mm thick. Created by Swiss engraver Dick Steenman, the disc of rose gold is engraved, sanded for over 30 hours, and resembles liquid gold that has been poured onto the dial. Limited to eight pieces. Hublot presented the Big Bang Broderie 41mm at SIHH this year. It comes in three runs of 200 pieces, and is an excellent example of Hublot’s talent for fusing technology and art into one beautiful feminine package. For the second year running, the model features Saint Gallen embroidery on organza silk. Released from the confines of tradition, the embroidery is found on the watch’s strap and its dial. Furthermore, encased in carbon fibre, the embroidered web-like material acts as a shell to form the dial and the carbon bezel of the watch. Velvet by Massaro is a line designed to thrill and celebrate the feminine. As such, Roger Dubuis collaborated with the prestigious 130-year old Parisian shoemaker Massaro to create a timepiece that featured gold, silver, feathers, beads, woven motifs, cinema costumes, minus the spangles and bling. At SIHH 2016, their collaboration brought forth the creation Rita — a tribute to Hollywood actress Rita Hayworth. She was nicknamed “The Love Goddess” as she exuded a provocative presence and had a taste for living dangerously and passionately — a trait that is shared with Roger Dubuis.