The varied hues of spinel have been admired for hundreds of years, but their resplendent grey shades have often been overlooked. In recent years, grey spinel has experienced a rapid rise in popularity due to their luminescent tones, wearability, and affordability. In fact, Pantone selected “Ultimate Grey” as a colour trend for this year alongside ‘Illuminating Yellow.’ After the rigours of 2020, grey quietly assures, encourages feelings of composure, steadiness, and resilience. The stones’ minimalist silvery hues conjure up the colour of pebbles on a beach, a grey moon to New York’s sleekest skylines. 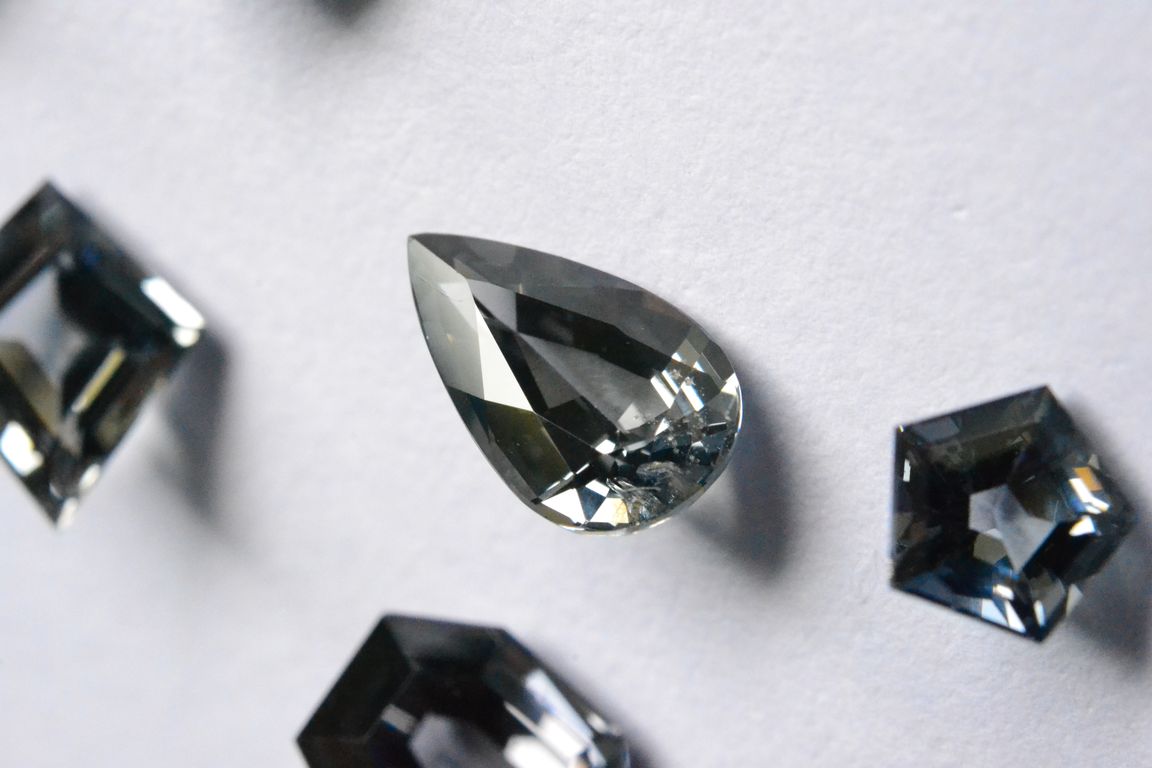 The palette for grey spinels range from gunmetal grey, steely grey to a deep charcoal grey. “Some also have a slight secondary purple, violet, or blue undertone and may appear to have a sense of colour change,” said Navneet Agarwal of Navneet Gems, a gemologist and wholesale gems supplier. The finest stones come in a pure grey hue, with no undertones, said Agarwal who revealed that those found in Burma are the most prized for their pure colour. Other major mining localities include Tanzania, Sri Lanka, and Vietnam.

Citing the stones’ quiet qualities, cool sophistication, and understated elegance, Agarwal believes the appetite for fashionable neutrals like grey will continue to grow. He noted strong interest particularly in the USA. “At one point, all trade shows were showcasing grey spinels to satisfy the rise in demand.”

Their widespread appeal is likely due to increasingly adventurous tastes, as consumers venture beyond the sparkle of diamonds for less conspicuous and quieter forms of luxury. Millennial and Gen Z wearers are also looking beyond the classic gemstones, seeking unique colours that convey their personal tastes and emotions. Sabrina Leong of Singapore-based jeweller Madly Gems added that lovers of grey spinel often have alternative tastes, appreciate individualism, and unique beauty that are against the mainstream flow. “Our clients are often on two ends of the spectrum, they’re either looking for a gem that’s understated but different, or they’re really looking to make a statement. A neutral tone like grey forms a stunning backdrop to an impactful design,” she revealed.

Navneet Gems boasts an expansive collection of grey spinels for wholesalers, ranging from below 1 carat up to 5 carat sizes. According to Agarwal, top quality grey spinels have an open grey colour that resembles the moon. “The hardness of spinel combined with the colour of the grey moon makes this new generation stone one of the most popular choices for consumers,” he said.

Agarwal adds that there is no other real precious stone that comes in this tone, saturation, and hue. “Smoky quartz is an abundant material on the earth’s crust, the hardness is poor and is often treated to get the smoky colour. Grey Sapphires of similar brightness and quality commands four times the price.”

Grey spinels can be found in a range of qualities and cuts. He further noted that commercial production is popular in jewellery however, 2 carats and above are becoming more difficult to source with 5 carats and above being incredibly rare. “Cushion cuts are the most popular cuts in the market as it’s the shape of most spinels, followed by emerald and round cuts that match the classical diamond engagement ring style,” reveals Agarwal. 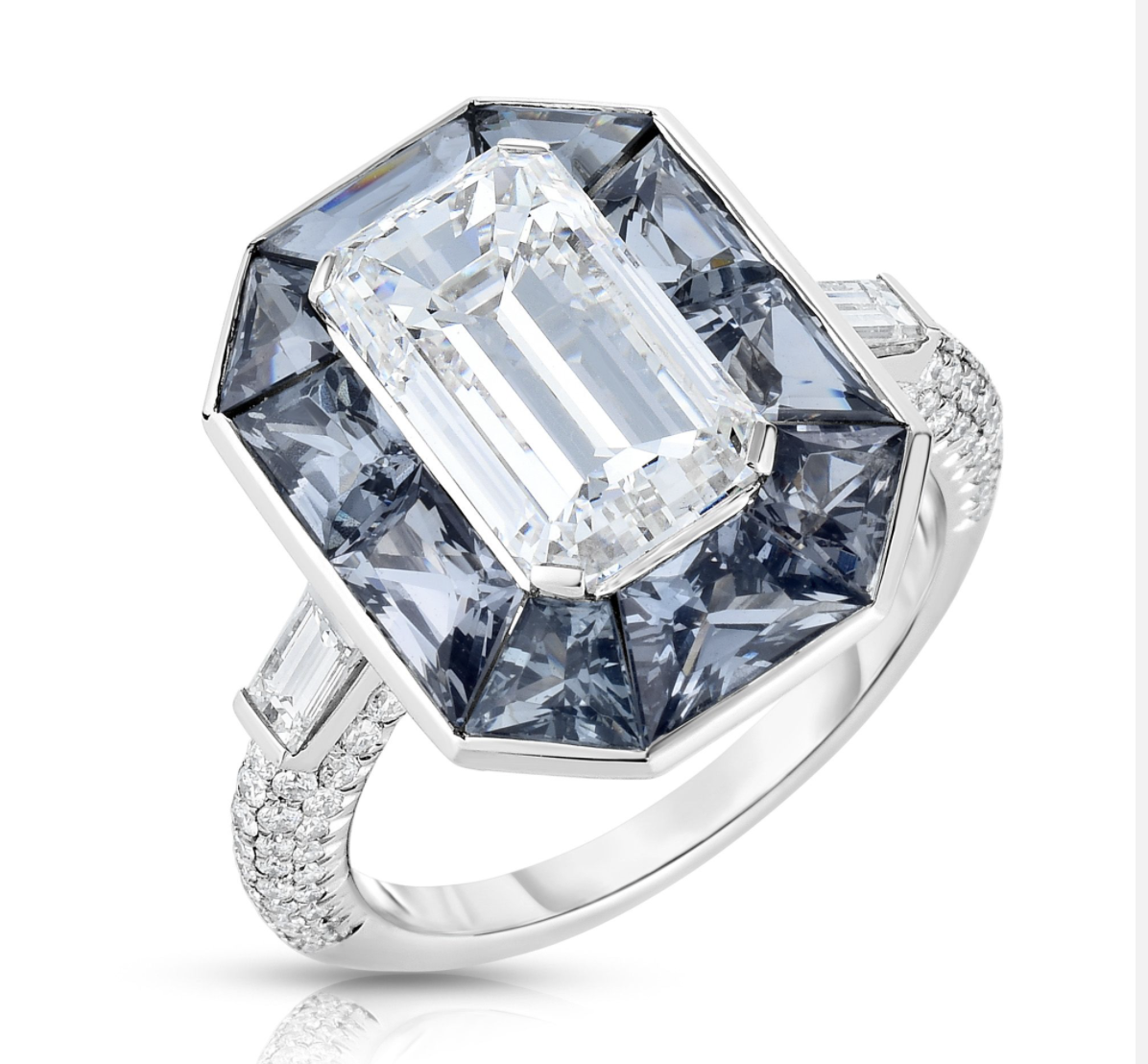 Jewellery designers have embraced the beauty of grey spinels and its ability to evoke nuanced emotion. This subdued gemstone is taking a starring role in numerous jewellery collections, both by established houses and smaller, independent labels. The gemstone was featured by Louis Vuitton jewellery creations, such as the 2012 Voyage Dans le Temps collection, which included approximately an 11 carat oval-cut grey-blue spinel ring with diamonds. The gemstone is also a feature in high jewellery designs by Austy Lee, Nicholas Lieou, Feng J, and is also popular for the engagement and bespoke jewellers.

Whether grey spinels are the star attraction or simply used as an accent, as in this Cicada Diamond and Grey spinel ring, the colour of the grey spinels really comes to the fore when it is paired with white diamonds for a modernist look. 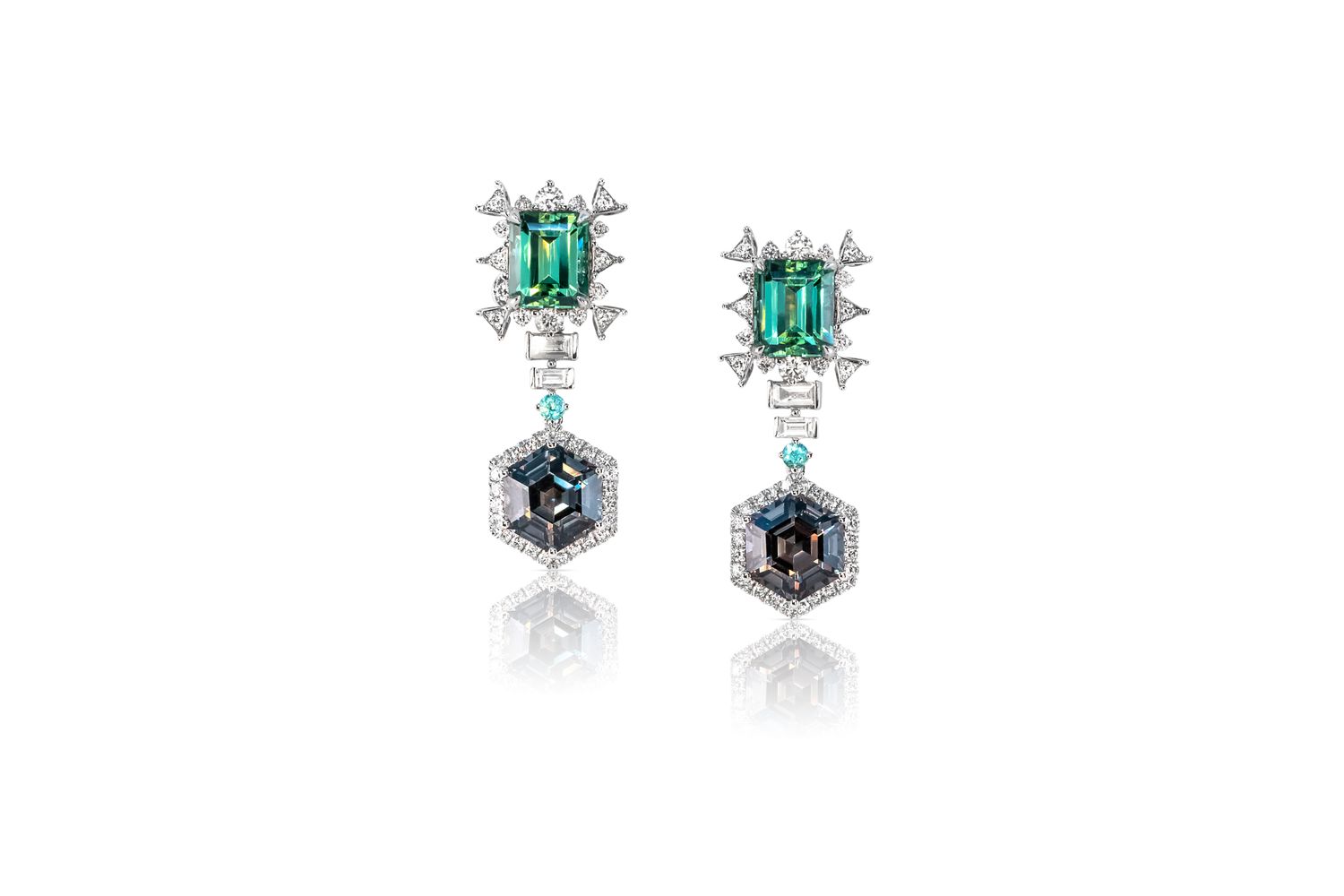 Grey has always eluded to a luxe minimal style, but also has the ability to convey a cool modern vibe. Madly Gems has featured grey spinels for years. Leong says, “We love how versatile they are — both for the client and the designer. If clients are looking for a gem that they can wear all the time, without needing to match with their outfits, but still unique, grey spinels are a great choice.” She also noted that grey Spinels have a similar effect to diamonds in that they’re simple in their own form and allow designs to take a life of their own.