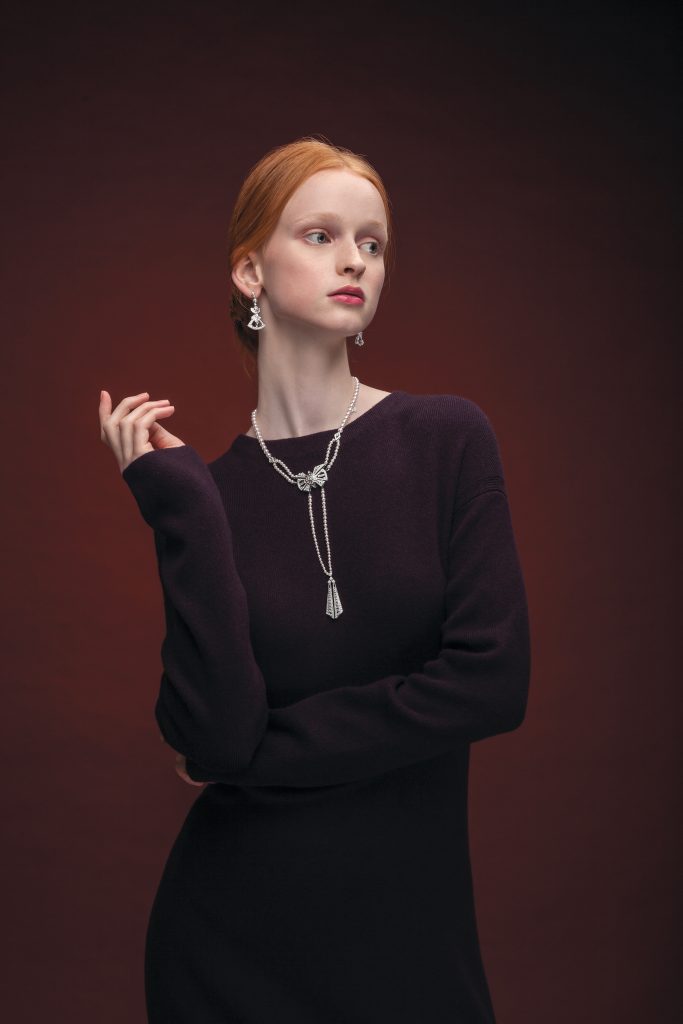 The beginning of a pearl is a curious thing. In reality, it is merely an accident – an irritant that makes its way into an oyster, clam, or mussel. But nature has a funny way of transforming this adaptive instinct into something truly magical. As a form of defense mechanism, the oyster secretes an iridescent fluid known as nacre, which coats the irritant (usually a foreign object). It deposits the pearly layers until the lustrous sphere we are all familiar with is formed.

While this product of chance is already a thing of magnificence, leave it to the Japanese to further improve it, as in the case of Mikimoto. Relentless in his pursuit of beauty, the brand’s founder, Kokichi Mikimoto, attempted to produce cultured pearls to be loved and coveted by people around the world.

In 1893, he became the first person to successfully culture a semi-spherical pearl. Not satisfied with the results, he continued his attempt to culture more types, which included black and white South Sea cultured pearls. This earned him the distinction of being the originator of cultured pearls. 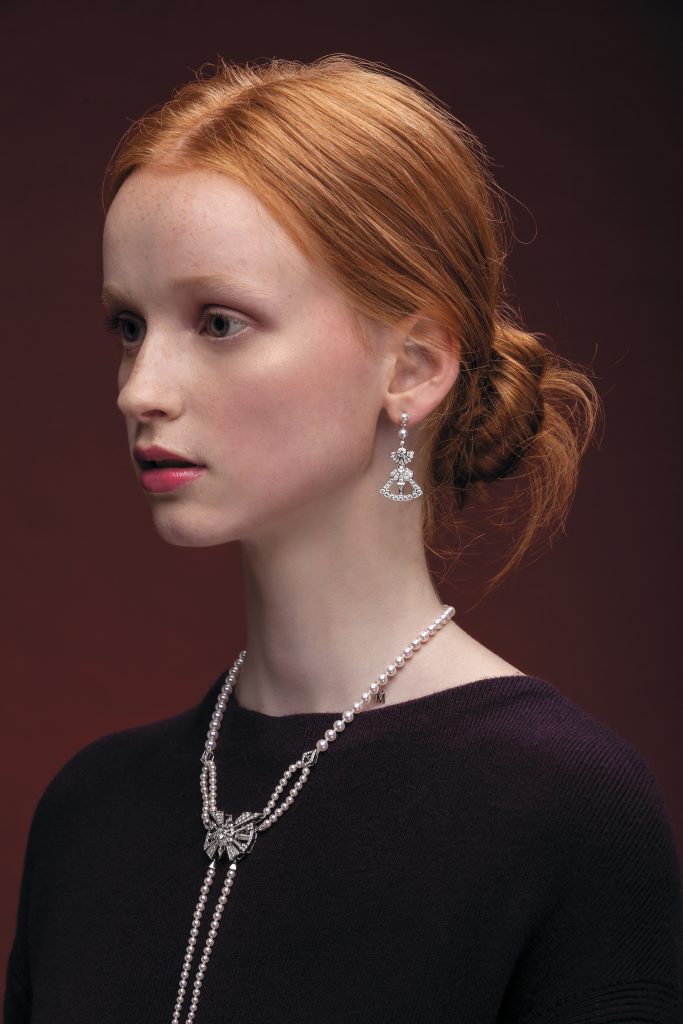 Driven by the desire to “adorn the necks of all women around the world with pearls”, he opened Japan’s first pearl specialty boutique in Tokyo’s posh Ginza shopping district in 1899. This was merely the beginning. Subsequently, he opened seven international stores in prime locations before World War II, including London’s New Bond Street and New York’s glitzy Fifth Avenue. Also notable was the relocation of Mikimoto’s Paris boutique to Place Vendôme in 1986, which signaled the prestige associated with the brand. To this day, Mikimoto is the only Asian high jewellery brand in this famous location.

Further cementing the quality of Mikimoto’s cultured pearls was an encounter in 1927 with famed American inventor, Thomas Edison. Admiring the Mikimoto pearl that was presented to him, Edison said, “This isn’t a cultured pearl, it’s a real pearl. There are two things which couldn’t be made at my laboratory – diamonds and pearls. It is one of the wonders of the world that you were able to culture pearls. It is something which is supposed to be biologically impossible.” These words encouraged Kokichi Mikimoto, especially since there was validation for the value of his innovation by a fellow creator.

As he steadily introduced the Mikimoto brand around the globe, Kokichi Mikimoto also began to broaden his scope of interest by producing jewellery that used gemstones, in addition to pearls. He sent craftsmen to Europe to learn the latest techniques and styles in jewellery, including Art Deco and Art Nouveau, which were popular design motifs of the time. Using this knowledge brought back from Europe, he began to skillfully blend traditional Japanese metalworking craftsmanship with European manufacturing techniques to create a signature style.

This cross-cultural meeting of styles is best expressed in Mikimoto’s legendary Yaguruma (Wheels of Arrows) Sash Clip – an elaborate piece of jewellery that can be used in 12 configurations, ranging from a brooch to a ring and various hair ornaments. The piece, which was exhibited in the 1937 World Exposition in Paris, stunned with its faultless pearls, assortment of gemstones, multifunctional use, and exquisite Art Deco-style details. 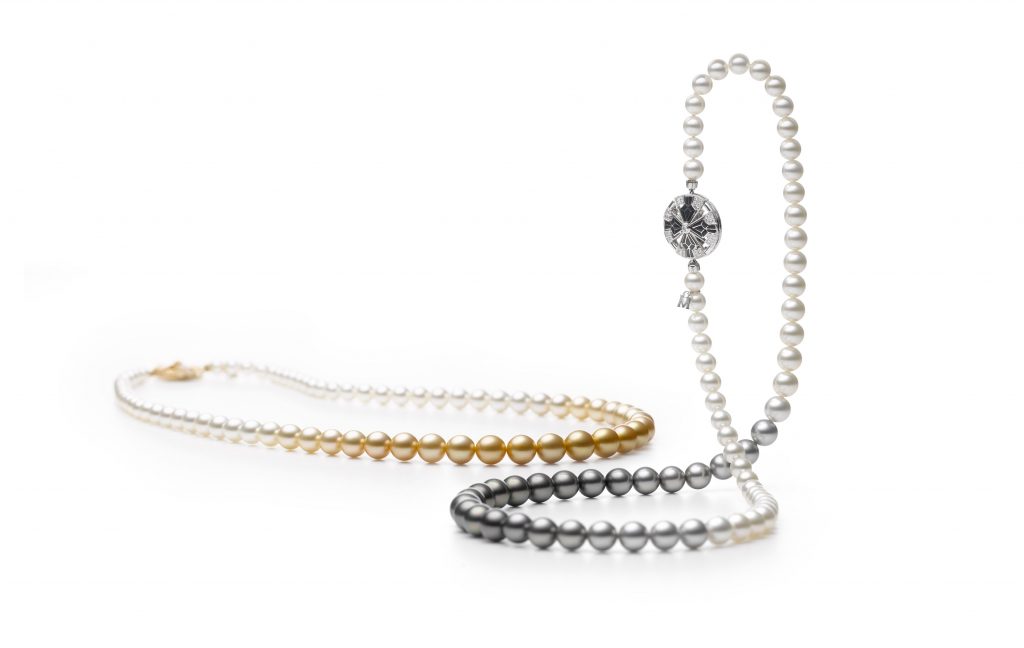 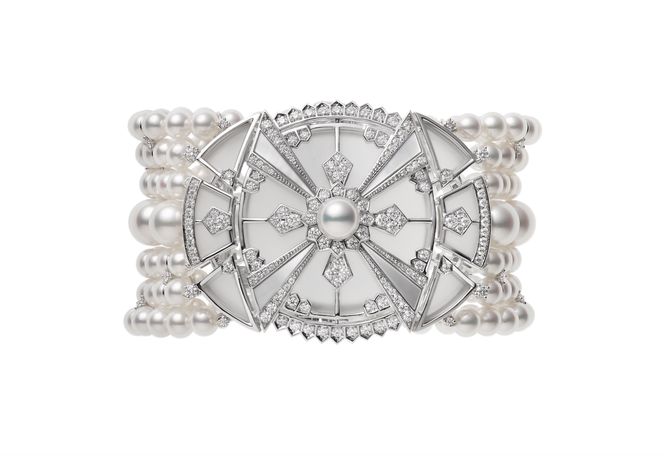 When Mikimoto celebrated 125 years in 2018, the brand revisited the classic piece and translated its vintage design into a brand new Yaguruma collection. The range featured a multitude of pieces, with notable ones like the 18-carat White Gold Belt with Japanese Akoya Cultured Pearls, 18-carat White Gold Bracelet with Japanese Akoya Pearls, as well as an assortment of pendants and cultured pearl necklaces. As a nod to their predecessor, the pieces are executed with design details that call to mind the vintage appeal of the iconic original.

Looking back, the reputation that the Mikimoto brand enjoys today alludes to the formation of a pearl. It all started with a smell speck, an idea that was built upon with passion and dedication over time, resulting in an accidental gem that is now loved the world over.