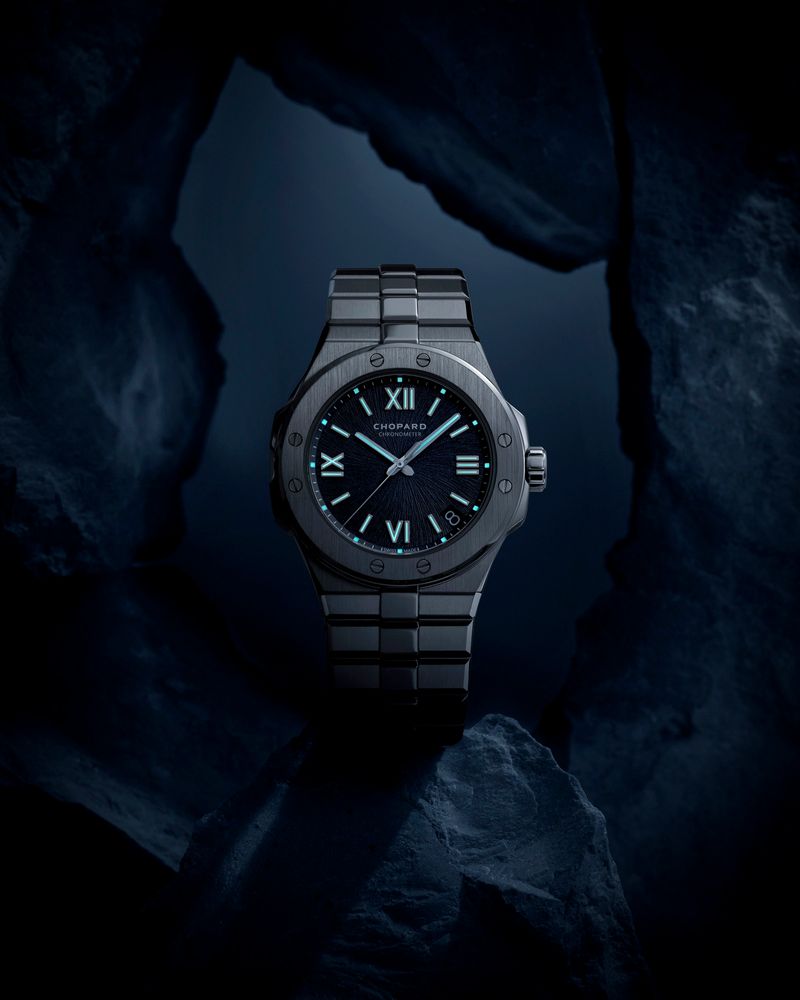 The year was 1972, just a few years after the ‘Quartz Crisis’ where Japanese ingenuity with the introduction of the more precise, high-beat quartz movement caused Swiss watchmakers to shelve their mechanically-operated timepieces. Hence, in recognition of a more robust sense of wearing watches, where style could take equal precedence with function, luxury steel sport watches made their entrance. It was in pursuit of the same idea: A full metal watch with a clean legible dial; an attempt to bring mechanical movements back into the market.

Until today, the steel sports watch is a coveted silhouette, and the years in between have seen almost every Swiss manufacture create their own interpretation of the staple. For Chopard, it was in 1980 when they inserted themselves into the timeline, with the introduction of the St. Moritz. It was a vision set in motion from the mind of then 22-year-old Karl-Friedrich Sheufele. Right off the bat, the collection carried two-toned and full precious metal versions, with framed bezels and complete with a bracelet to match. The advertising campaigns focused on them as watches that were suitable to be worn for sports, whether on or off the pitch. From golf to skiing to tennis, it was marketed as a sporting collective, featuring white and coloured dials with a date aperture, and some accented with diamonds for the ladies’ versions.

It’s worth mentioning that the stylistic, functional demeanor of steel watches wasn’t love at first sight. Watches of that era were generally slim and minimal. The addition of framed bezels and weighty bracelets took their time to be accepted, thus when Scheufele presented the St. Moritz for Chopard, it was a first for the manufacture to adopt its own sports watch, which was a slight deviation from its gilded and diamond-adorned dress watch specialties.

Almost 30 years on, the spirit of the St. Moritz takes on a new form – the Chopard Alpine Eagle. 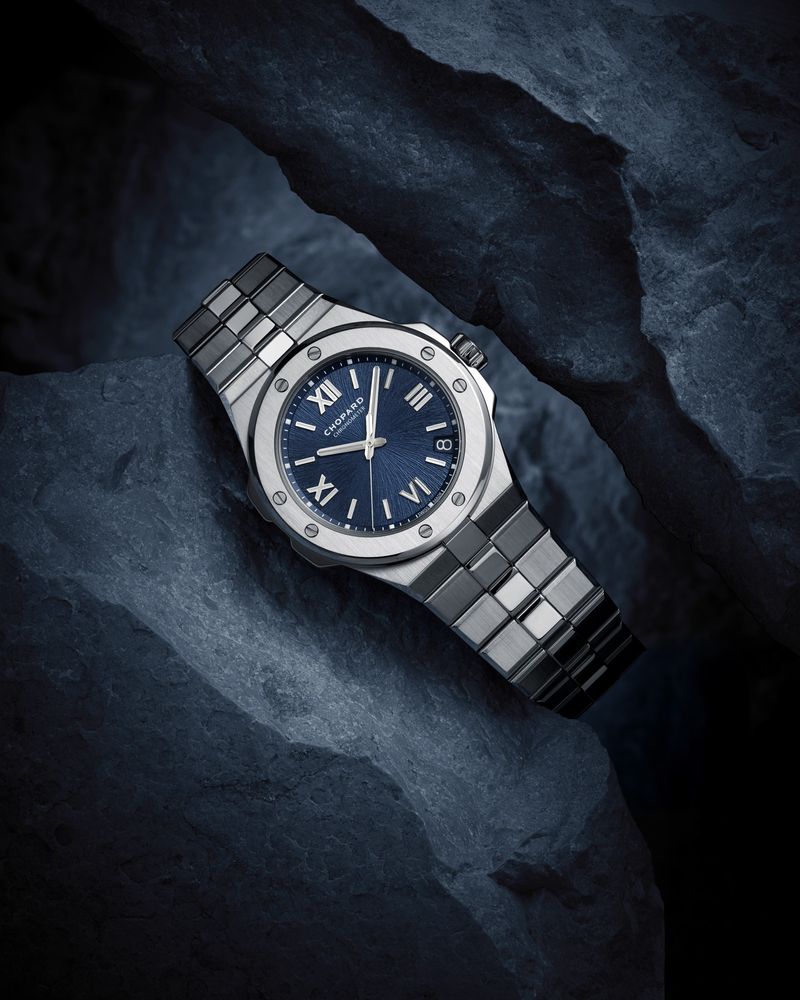 With an integrated case and bracelet, the Alpine Eagle takes after the St. Mortiz in a similar physical exoskeleton, albeit with more modern finesse. Available in two sizes, 36mm and 41mm, the revived sports collection is designed with a thickly framed bezel, with eight visible screws that aid in sealing it in for increased water resistance. Time is easily read off a Roman numeral chapter ring in bold appliques, and displayed against coloured brass dials with unique finishes. A rough sunburst motif is adopted on galvanic blue and slate grey dials, a detailing inspired by the iris of an eagle’s eye. The 36mm size is expanded to include versions with white and Tahitian mother-of-pearl. 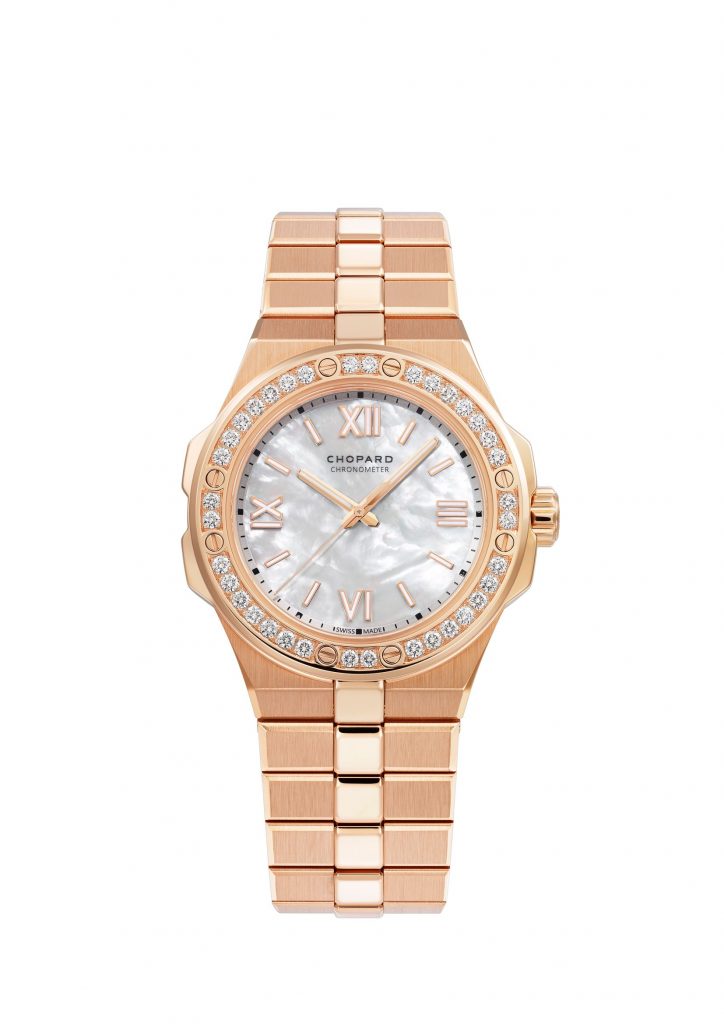 As for structure, the three-link construction is condensed, made up of a small middle link that runs down the middle. When worn, the watch carries noticeable weight, both visually and physically, in either version of 18k rose gold or Lucent Steel A223. The material in question is Chopard’s proprietary metal, an alloy that was the result of four years of research and development. Standard steel undergoes a re-smelting process to acquire the desired characteristics of increased strength (223 Vickers’ strength), high dermo-compatibility, and a highly reflective surface that gives off a sheen that claims to be as bright as gold.

Powering the 41mm Alpine Eagle is a new in-house 01.01-C automatic winding calibre, with the provision of a 60-hour power reserve, while the 36mm version is fitted with an 8-ligne 09.01-C calibres, making it one of the smallest COSC-certified movements.