Relieve the romance and glamour of the bygone eras through jewellery

For many jewellery lovers, ‘vintage’ is a romantic term, describing bygone eras of beauty and glamour. For some, the term brings to mind treasures passed down from their grandmother, created and gifted during a time when courtship involved poetry and handwritten letters.

Strictly speaking, though, there’s a line between vintage and antique jewellery. Experts may disagree on where to draw this line, but the place of origin matters as well. Generally, to be considered vintage, a piece of jewellery must be at least 20 years old. In the USA, it is typically considered an antique if it’s 100 years or older. However, in Europe, jewellery have to be more than a century old to be classified as antique. The reason for this discrepancy lies in the history of these Western regions. Consider that European colonisation of America — which bred the racial majority of America as we know it today — only began in 1492. Of course, centuries before this, Native Americans had developed their own style of jewellery, usually made out of bone and shells — like many other cultures at the time.

Jewellery-making out of metals and precious stones — as opposed to the crude methods and materials used by prehistoric humans and early civilisations — developed in the Middle East and Europe around 5,000 to 4,000 years ago. By the 1400s, Europe was already deep into the Medieval ages, which had its own signature jewellery aesthetic produced by artisans and goldsmiths in workshops.

THE VALUE OF VINTAGE JEWELLERY

Nostalgia aside, what makes vintage jewellery so valuable?

“Vintage or antique jewellery is valuable for their intricate designs and workmanship known for that period of time,” says Connie Huang, Head of Jewellery Department at Tiancheng International Auctioneer Limited. “For instance, Art Deco style was popular during 1920s-1930s. Art Deco pieces contain beautiful compositions of clean lines, angles, geometric shapes, and basic symmetry. And from 1890 to 1910, the curves and patterns of plants and flowers are signatures of the Art Nouveau style.” Huang adds that such styles of jewellery are creations of their era and cannot be imitated, making them especially valuable. Meanwhile, as the supply of high-quality gemstones becomes ever scarcer each year, connoisseurs are looking to vintage jewellery that contain such gemstones.

To find examples of the most valuable jewellery, one would do well to look into the collections of auction houses. Take, for instance, these pieces of jewellery Tiancheng International sold in recent years: This piece of jewellery contains two emeralds — one weighing approximately 2.90 carats, and the other weighing around 2.50 carats. All in all, the diamonds in this piece weigh around 8 carats. Ruby and Diamond Bracelet, circa 1920s This bracelet’s rubies, arranged in a row, altogether weigh around 18.70 carats. It also comes with 15.75 carats’ worth of diamonds.

Vintage jewellery can come in the form of other accessories, too. For instance, Tiancheng International has also sold a pair of emerald and diamond cufflinks and a green agate box dating back to the 1920s, as well as a jadeite, enamel, and diamond vanity case from the same decade. 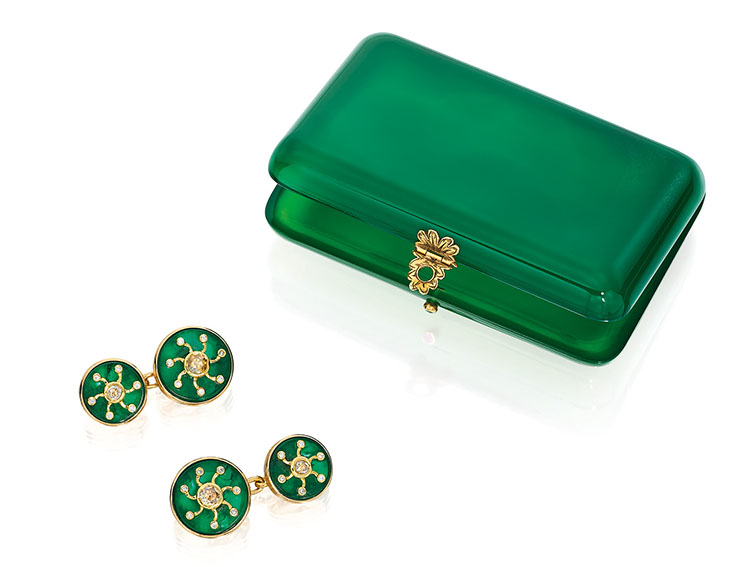 Pair of emerald and diamond cufflinks; and green agate box, circa 1920 Its 2019 spring auction — to be held on May 24 to May 29 — includes a gold a cigarette case bearing the signature of Russian goldsmith Anders Mickelson, as well as a Cartier diamond pin with conch pearls and diamonds. It’s crucial to verify the authenticity of a vintage jewellery piece through a reliable acquisition channel or platform, such as from the brand’s house itself, a highly reputed shop, or a reliable auctioneer.

“Auction houses have reliable sources of consignments and are a solid third-party connecting consignors and buyers. And when a buyer wants to resell the jewellery acquired from an auction house, the past auction record would be a good reference,” explains Huang.

But as a buyer, it’s important to choose a piece of jewellery that you like and enjoy. “In my opinion, how you like the jewellery piece is always more important than treating it as an investment only. Jewellery is a piece of art and personal accessory. Art appreciation should go beyond its pecuniary value,” says Huang.

How you like the jewellery piece is always more important than treating it as an investment only. Jewellery is a piece of art and personal accessory. Art appreciation should go beyond its pecuniary value

WHEN EAST MEETS WEST
Oftentimes, people purchase vintage and antique items for their whimsical nature and the knowledge that similar pieces will no longer be produced in the modern era. Take, for example, a Qing Dynasty mother-of-pearl gaming counter set sold by Tiancheng International in 2015. No one but historians today might know how to use these counters. And while this counter’s novelty makes it so desirable, its materials greatly added to its value.

Gaming counters were used as monetary tokens at the start of the game. They were made either of ivory of peeled bamboo stems. At the end of the game, the counters are exchanged for money — much like the chips used in today’s casinos. In the 18th and 19th centuries, a Chinese card game made its way to Europe, and along with it, gaming counters. Eventually, the continent’s elite began collecting counters engraved with family monograms. They became status symbols, as it took one to two years to deliver a bespoke gaming counter to the client.

When the popularity of card games ceased in 1840, demand for gaming counters plummeted, and imports of these items from China came to an end. A precious few remain today, making them highly coveted collectibles.