BULGARI AND MB&F COLLABORATE ON A WATCH UNLIKE ANY OTHER | Solitaire Magazine
© Media Group Pte Ltd. All Rights Reserved. 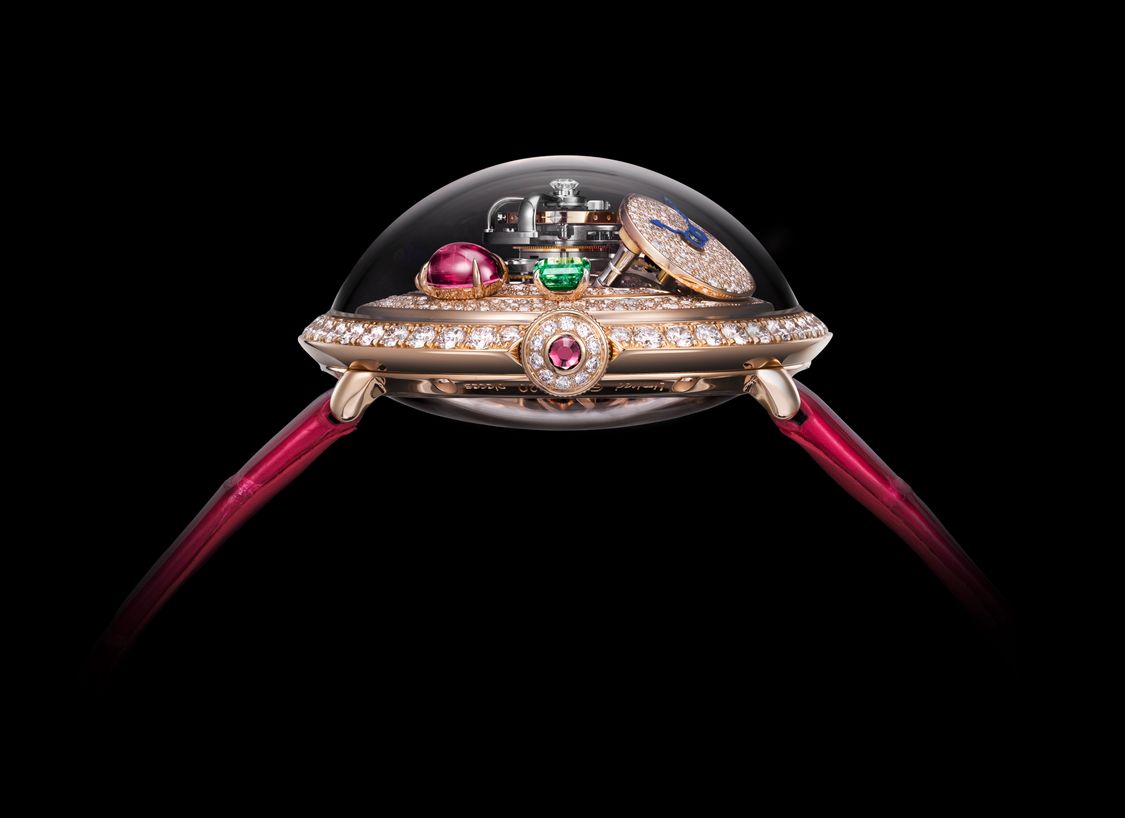 It takes courage and an inexhaustible appetite for creativity to design horological marvels like the Bulgari x MB&F Legacy Machine FlyingT Allegra: A timepiece crafted with an unconventional approach. It’s the result of the brilliant minds of Bulgari’s Product Creation Executive Director, Fabrizio Buonamassa Stigliani and MB&F’s Founder and Creative Director, Maximilian Büsser, whirring into action.

It all started four years ago at Dubai Watch Week when Max (Maximilian) introduced himself to Fabrizio and told him how much of a fan he was. “While having coffee, Fabrizio did not stop sketching all sorts of potential Bulgari x MB&F pieces. It was for the fun of it. Neither of us thought this would ever happen,” he recalls. Two years later, at another Dubai Watch Week event, the duo had breakfast – and this time they had company – Antoine Pin, the newly-appointed Managing Director of Bulgari watches. Antoine, having witnessed first-hand the passion both Max and Fabrizio shared about a potential collaboration, gave the nod. What unfolded is a story of two people who set out to create a futuristic women’s timepiece. Although the two talents discussed all sorts of projects, it stayed between them. It was in March 2020, mid-lockdown, during a Zoom call with both their teams that Max suggested they use the FlyingT (created in 2019) for the endeavour. “While I was explaining why it seemed to make sense for us, I could see Fabrizio sketching furiously – and suddenly, he lifted up the drawing which was more or less what our FlyingT Allegra would be. It was perfect. I immediately agreed and we started working on it,” reveals Max.

As for Fabrizio, he shared with Max a passion for ‘80s culture, Goldorak, and the UFO trend. While MB&F pieces reflect this aesthetic and served to fire his imagination, it seemed inevitable that Fabrizio would take that passion further. “It plays with volume in a way we don’t at Bulgari. So, of course, I wanted to give it a try! Transforming the plain design of Allegra into a dome, finally making my UFO too.” 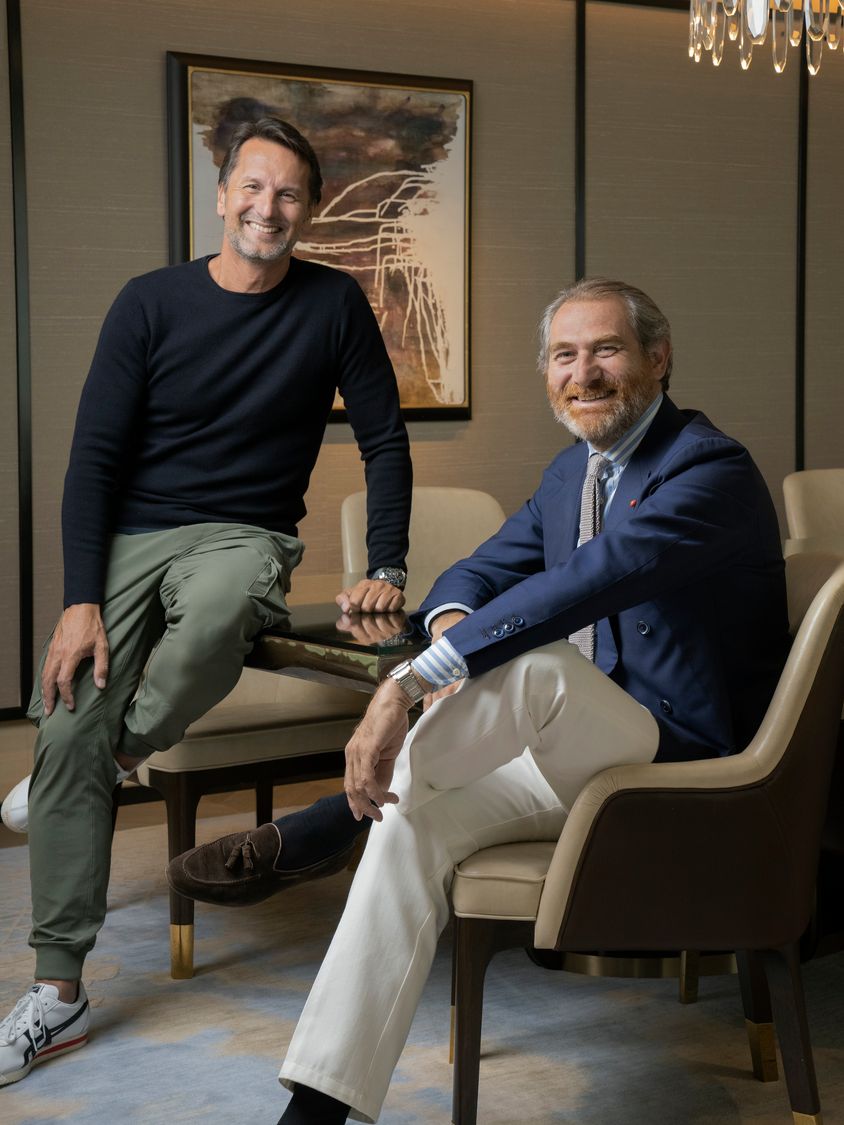 During their initial discussions, Fabrizio envisioned a carousel of coloured gems in the Flying T dome. “Max understood the intention and accepted that I was, kind of, disturbing his so-neat design by introducing the gems inside of the dome in the Bulgari way, not in the MB&F way. When we saw the first prototype of the watch, we both agreed that it was exactly what it was supposed to be. It was amazing,” says Fabrizio.

Bulgari watches – like the Octo Finissimo line – are noted for their record-breaking thinness. Nevertheless, the Maison also creates the likes of the Octo Roma with a larger dimension that enables Fabrizio’s team to develop chiming watches, or the Serpenti series – opulent and visually generous. “What was interesting with MB&F was that its specific shape allowed me to imagine a coloured world inside of the dome. We picked the stones, in both shape and colour, following the Allegra collection. They are harmonious when you put them together. When you look at it, you see the harmony and the balance. This is the beauty of the collaboration. The symmetric and sharp design from MB&F and the fantasy and playful design from Bulgari,” says Fabrizio. 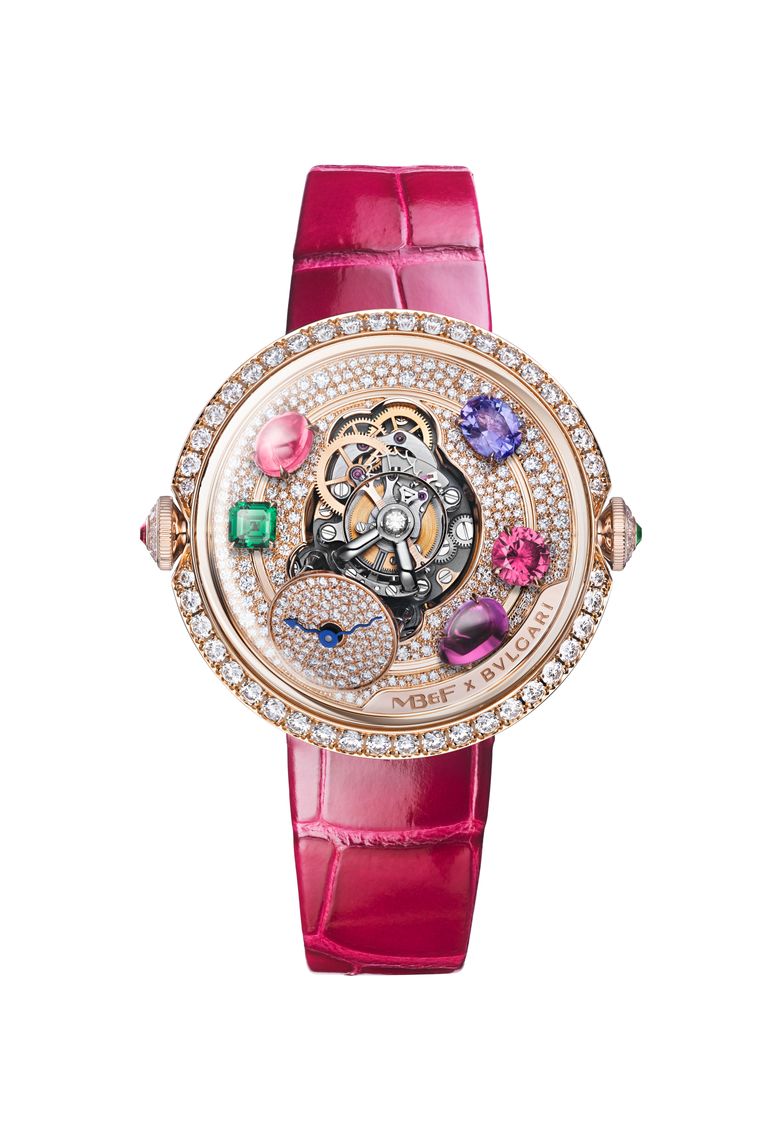 On closer inspection, the stunning ‘flying’ coloured stones in different cuts and sizes seem to be gyrating around MB&F’s flying tourbillon. “Fabrizio completely redesigned our case by making it more ‘UFO’ like and by taking the lugs off and increasing the size of the bezel to accommodate the larger diamonds. Except for the movement, every single part of this watch was redesigned by Fabrizio. We then engineered everything accordingly – which is a pretty intense amount of work for such a small series of only 40 pieces,” explains Max, whose FlyingT was originally dreamed up as a “love letter” to his wife and two daughters. It took him four years (between 2015 and 2019) to transform the idea into reality. “I am a very symmetrical creator and while this design is asymmetrical, I love it. It took me to a place where I would never have gone,” he adds. Fabrizio kept all those fundamentals intact and added the Bulgari world to it. This is a timepiece that is so much more than a sum of its parts. The white gold and red gold versions have the same diamond set dial plate and dials – the differences reside in the big Allegra coloured stones. 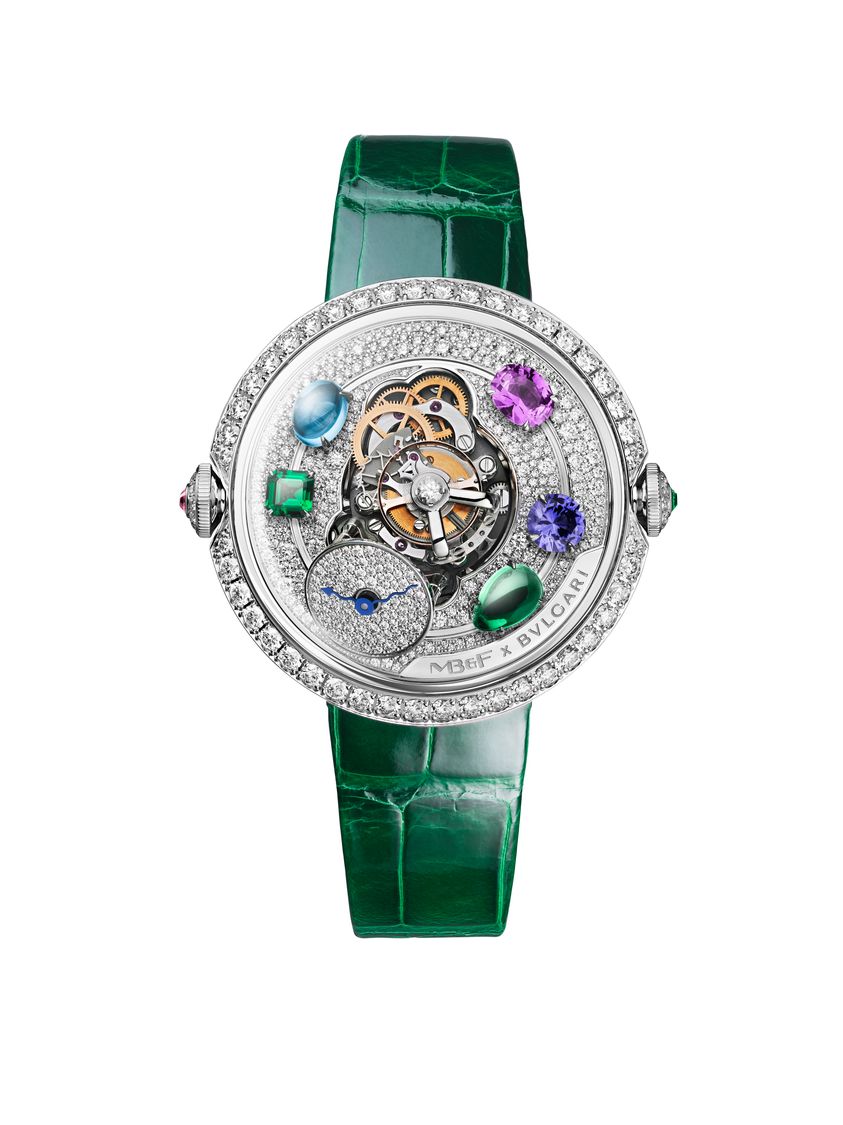 “This was probably our most seamless collaboration to date – a pure moment of joy. I will admit I was terrified of working with a big company like Bulgari. I thought there would be endless meetings, marketing briefs, multiple validations at different levels, which would suck up time and energy. But nothing of the sort happened. Group CEO Jean-Christophe Babin clearly works with an entrepreneurial spirit and gives free rein to his watchmaking team, who, in turn, are incredibly efficient and fast. Both our teams were very happy working together over the past two years, which proves, once again, that whatever the size of the company, it is always about people,” Max points out.